The Solar Team Is The Way To Go 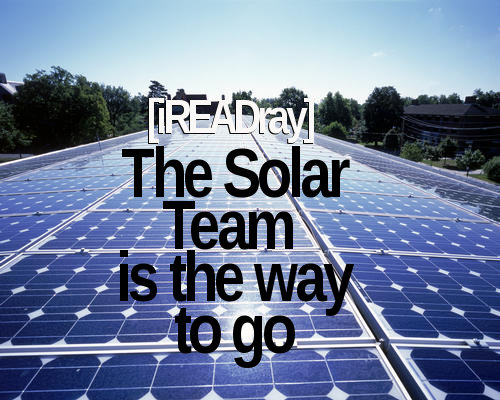 When it comes to the Arizona economy, there seems to be something missing. It’s the same something that is missing in many other states. It’s called revenue.
Bleeding in economic failure, Arizona has been hit hard by the housing bubble popping. Back in the golden days, Arizona was number one in job growth nationwide. It was all housing, and new construction. That is now gone. And Arizona ranks last.
It’s time for Arizona to find a new source of cash to the state, and that problem’s solution lies in solar energy.
Arizona, a state that sees almost no rain, with the sun shining more than 300 days a year, is the perfect place to begin the solar approach. Simply, APS, Arizona primary power company, could easily place solar panels on tops of schools, and libraries, and support whole neighborhoods with the amount of clean energy. They can generate more than they need and sell it to places like California, or whoever is willing to buy it.
Plus, the jobs it would create in the state would be more than the few they are creating now. Simply, solar energy is the way to go. It’s common sense.
And there are folks out there who want to push solar energy in Arizona. In fact, they call themselves the “Solar Team” and they want to be Arizona’s next Corporation Commissioners. The team is made up of Sandra Kennedy, Paul Newman and Marcia Busching, and they really are the ones with the smarts and vision that Arizona needs.
Busching said in an letter-to-the-editor, in the Arizona Republic, just that. “The Solar Team candidates believe that world-class service includes solar energy, with Arizona leading the way to energy independence.”
She has a point, so when voting vote for Arizona, and vote for the solar team.
Arizona Corporation Commission (select three)
DEM: Sandra Kennedy <<<<<<<
DEM: Paul Newman <<<<<<<
DEM: Marcia Busching <<<<<<<
REP: Bob Stump
REP: Robert Burns
REP: Susan Bitter Smith
Copyright 2020 by Ray Ceo Jr. and the iREADray brand. For permission to reprint, email ray@ireadray.com.