Why Kyrsten and Not David or Andrei 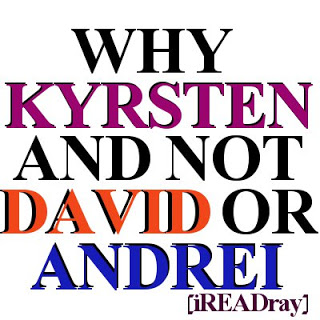 The 9th Congressional District in Arizona is one of the newest congressional districts to come out of the 2010 census. For Arizona, it looks like it could be a very competitive district, and has drawn three huge names in the Arizona Democratic party to the nomination block.
Kyrsten Sinema, David Scharipa, and Andrei Cherny.
Months ago, iREADray endorsed former State Senator Kyrsten Sinema, because of her strong ability get the job done. And do it right.

We stand behind that endorsement. To understand the dynamics of this race, one must first know a bit about the politcal background of the three candiates.

Sinema, an openly bisexual state Senator knows how to work with Republicans. Certainly, she is the most liberal of the bunch (an important quality in the Democratic primary) but she get’s shit done. While chairing the Arizona Together group in 2006, her co-chair was a former Republican State Representative (Steve May). It doesn’t hurt that Sinema knows how to a hone a message, or that she is a smart woman who comes from a very modest upbringing. (Just watch her video to know her life story).

When it comes to formering coalitions, of diverse people — from political backgrounds to race, sexual orientation and greed, Sinema has it nailed.

Additionally, money is not question for Sinema. She isn’t independently wealthy, though she does have a book out, but she knows how to fundraise. She has a good connection of wealth donors, as well as a huge group of volunteers all willing to put their wallet where there mouth, and campaign walks, are.. Simply, she is the best person for the job. She has the best shot of making that seat be a good Democratic one for Arizona.

If Kyrsten wasn’t in the race, my support would be behind David Scharipa. He is not a great guy, but he is a good guy who has been there since the start of my political journey. And let’s face it, in 2008, Scharipa was one of the only Democrats in Arizona to fend off the Republican’s vowing for their spot. He knows how to run smart campaigns. He beat Wendy Rogers, a rumored GOP nominee, in 2008. Here is what I do not like about him. When I ran for Constable in 2007/2008, he said he privately supported me. He was afraid of any sort of backlash he might get for supporting me. He did not explain in too much detail, but the sentiment was there. He supported me, he just didn’t have the balls to say he did. This election, we have need someone with balls, and in this case, it’s lady Sinema.
As far as Andrei Cherny is concerned. He plays dirty. Really dirty. He has been known to run counterproductive smear campaigns, and other awful tactics to win. Right now he is trailing badly in the polls for the nomination, and some (Sinema) have suggested that his campaign might turn nasty, fast, in hopes of upping those numbers. Fact of the matter is this, I do not even live in Arizona, but I give a shit about what happens there. People who were born in Arizona have a strange sense of guardianship/love/parental-feeling over their beloved state. I feel it, I know Sinema and Scharipa do — they were both born there. Cherny wasn’t. He is from California. And he is trying to move California politics into Arizona — and that’s not okay with me. It shouldn’t be okay with you either.
I, alongside iREADray, the Human Rights Campaign, the Victory Fund and several others, stand behind our endorsement of Kyrsten Sinema, and suggest you donate to her campaign. It’s worth it. She is worth it. And we need to make certain she gets elected.
Copyright 2020 by Ray Ceo Jr. and the iREADray brand. For permission to reprint, email ray@ireadray.com.