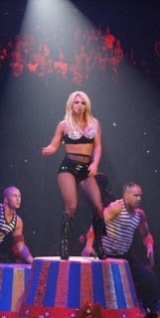 If you know me, you know that I love Britney Spears. And by love, I mean, really, truly love her. I get excited when her new music comes out, I adore her songs, music videos, and basically everything about her. I went to the store the moment you could to get her new CD every time it has come out since her first one more than a decade ago. Not too long ago, I was asked why I liked her so much. Ha, as if I need a reason. But thinking about it, I realized this column I wrote years ago best explains it, and since I haven’t posted in awhile, thought I’d take a second for my love, Miss Britney Spears!

(originally published on Thursday, September 13, 2007 in The State Press)

Britney Spears’ VMA performance sucked and not in the good way best demonstrated by Monica Lewinski.

Instead, it was like watching someone taking candy from a baby. It was almost as horrifying as watching Bush be re-elected President in 2004. I cried a little. A part of me died. And then I realized I should not be angry, but rather thrilled because suddenly a life-long dream of mine is now waiting for the taking.

Someday, before I am 30, I want to become a male version of Britney Spears. I want to dance, sing, date Justin Timberlake, and make out with Madonna all before I die. Back in the days when I had a young, innocent mind, I thought that singers actually did all of the work. I used to think that singers actually sang in music videos, that they actually sang at concerts, and I just took for granted that in the studio, they sung there too. Apparently, that is not the case at all.

As I grew older, I came to understand the process of lip-syncing and realized that Brit didn’t sing in music videos. This was a poor assumption on my behalf.

Then, on my thirteenth birthday, I was presented with tickets to Britney Spears’ concert, and was thrilled. I went, and again my original, high expectations of this artist were greatly depleted, as she lip-synced the entire concert. Lo and behold, apparently there are so many different devices that alter people’s voices that you don’t need to be able to sing in the studio either.

So, my ambition of becoming a male version of Britney Spears was suddenly on a roll again.

But, see, I was also under the impression that these artists had to actually write songs, something that — while I am great at writing lyrics (specifically ones with a high degree of sexual innuendo), I do not have any training in actually doing so. But, again, I learned that there are professional songwriters who do not sing, but write music to go with lyrics and create this great track that is later mixed in the studio to be something that you will listen to. No work required of the artist.

So, without any need for actual musical talent, I looked to dancing. Britney used to do a ton of dancing. In “I’m a Slave For You” she is so talented at dancing she is able to get licked and keep rhythm. In her hit, “Me Against the Music”, she dances with Madonna, every gay boy’s goddess, as she attempts to kiss her. But truth be told (and do not let the authorities know, as I may lose my membership to the gay club,) I can’t dance. I have no talent at dancing. I don’t move nearly as fast as Britney, and I cannot bend in the ways she does.

But apparently, as her most recent performance at the VMA’s showed us, you do not need to move quickly, you can just walk around a stage and play with your fake hair. So, another thing was crossed off my list of things to know how to do.

I also used to think that you had to be Olsen-twin-thin to be famous, but again, two children have not been nice to our poor girl’s body. Instead she looked like an inflated tanned marshmallow, complete with fluffy curves. This is good news for me, as I too have fluffy curves. Now mind you, my fluffy curves aren’t anything a good eating disorder won’t solve, but it’s good to know I don’t need to do any work.

Copyright 2020 by Ray Ceo Jr. and the iREADray brand. For permission to reprint, email ray@ireadray.com.